There’s no shortage of news reports on the housing market.  However, much of those stories are from a human interest angle, showing the devastating effect of foreclosures on neighborhoods and families.  These stories are heartbreaking and important.

There are other stories too, namely the stories from an economic perspective, that are lacking.  Most people I talk to don’t understand what exactly happened, mostly because there has been so little coverage explaining the issues around foreclosures and the secondary mortgage market.  I want to highlight a small, very specific part of this foreclosure crisis: MERS.

MERS is an acronym for the Mortgage Electronic Registration System.  It’s a company, built and funded by  banks interested in trading mortgages.  The purpose of this company was to streamline the buying and selling of mortgages.  For example, if Sally obtained a mortgage from Bank 1, and that mortgage was sold to Bank 2, both banks would have to facilitate a new note and trust deed against Sally’s property.  This means official, notarized signatures from both banks, and recording of that paperwork in the locale where Sally’s house (and mortgage) are located.  This is not cost-effective, simple nor quick, especially for national and international banking corporations.  It makes mortgages difficult to trade, making them less liquid, resulting in fewer profits for banks from their mortgage division.

Enter MERS- Bank 1 could register Sally’s loan with MERS, and MERS would handle the multiple transfers of that loan.  In essence, MERS was a tracking system.  MERS kept track of who owned that mortgage, whether it had been sold twice or thirty times.  No more pesky paperwork, no more recording new trust deeds with each transfer.

When the real estate market started to bomb, MERS also started handling foreclosures, processing paperwork for bank  #30, since they were left holding Sally’s mortgage.  At face value, it doesn’t seem that nefarious to create a company to handle paperwork for you.  But MERS has been sued in almost every state it does business in, because they don’t OWN your mortgage.  They aren’t listed as a trustee on your note and trust deed.  And in America, where home ownership is very strictly protected, only the actual owner of the loan can foreclose on your property.  So MERS, being a third-party, has no right to foreclose.

Currently, in Oregon, MERS has lost a least one lawsuit.  The judge sided with homeowners saying MERS had no right to foreclose.  MERS, and the banking industry, has appealed this decision.  If this decision is upheld,  it could transform the way the secondary mortgage market works. 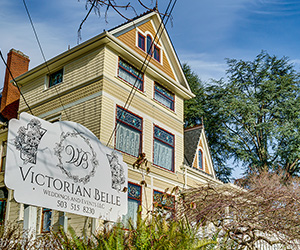 What is My Home Worth?